Last week we had some break from June Gloom (this week it’s back) and the beaches were getting full. There were so many umbrellas of different shapes and colors, I wished I could see the beach from above. That was the inspiration for making these: 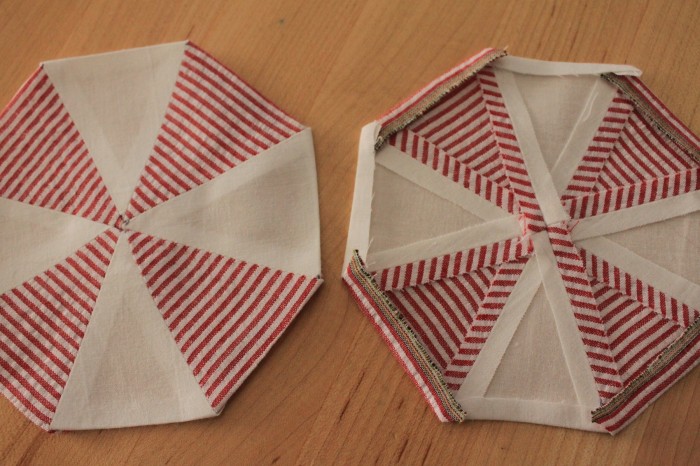 Initially I made a template for the trianges out of cartboard, but soon realized I would not be able to really use it. Even though it was pretty tough cardboard, it was not easy to hold, and it was still easy to cut into with the rotary cutter. So I thought of something else. I had one of those half square triangle templates (plastic) and so I used the 45 degree angle to cut these. I also used the cardboard template under the triangle template to make sure I got the height of the triangle right… This is hard to explain with words only, so I’ll get back to you when I get some pictures. Anyway… I cut enough triangles for 8 “umbrellas” for my quilt design, but then I realized I might want to do something smaller first, just to see how it goes, especially I decided to use linen as the “background” and I have really never used linen in a project like this before. So, instead of a quilt, there will be a pillow:

It is not finished yet, I still have to make the envelope back and bind it, but I actually did more than this picture shows (I appliqued these by hand). I added some embroidery and I quilted the thing, so it looks much more exciting that this. Finished photo to come when I finish the other project I started in the meantime.

For this project I cut out many, many squares. About 50 3.5 x 3.5 in, about 50 1.5 x 1.5 in and a lot of1.5 in wide strips of white cotton (I used an old white sheet). I started with one pink fabric with a Japanese design, and picked other pink/yellow fabrics from there (I realized I had quite a stash of pink fabrics). Cutting was actually not too bad – this was the first time I cut so many squares at one time. It was actually relaxing. When it was time to start assembling the squares, I got a little bit intimidated with the size (it was supposed to be a larger baby quilt, that’s all), so I decided, again, to scale down the project (“to see how it goes”) and do a doll or a mini quilt. (some commitment issues?) I chose 15 large and 15 small squares and a lot of strips and this is what I had yesterday evening:

Design is pretty simple: rows of alternating “big” and “small” squares with a 1 in strip of white separating the rows. Instead of sewing strips between rows (I wanted to avoid aligning squares between rows) I added a strip of white to each square (as you can see above). So I ended up simply sewing the (now) rectangles together into rows, and then rows into the finished top (actually it’s not quite finished. I decided to put a border around the whole thing – 4 in maybe?):

Just noticed the picture is not so good. Sorry about that. I had a problem: as you can see, some of the squares do not align so well. I can sew straight and cut perfect squares and strips, but the problem is the templates I have include 1/4 in seam allowance, whereas my sewing machine (Singer) has metric seam lines (5, 10, 15 and 20mm). So, I have to eyeball the 1/4 in seam which does not work so well. I would hate to draw on the machine, maybe I should get metric templates. Seen any? Maybe on our trip to Canada next week?

Going back to the machine. I want to finish this if I can…